I was recently asked to write a fairy tale.

The brief was that I was to be the heroine of the story. I was to embody the incredible traits you love, and be the woman I’ve always wanted to be.  There were no limits as to what I could do and I could have super human traits.

The truth is, I stalled. The thoughts that ensued were, in no particular order:

So I got over myself and got to it.

The result? It was enlightening. It was a caricature of the western world and it ultimately reflected what I am about and the change I desire for all humanity.

It’s a fascinating exercise and highly recommend you do it for yourself.

Thank you Vanessa Jane (Creative Strategist) for getting this out of me!

Once upon a time there was a world of busy human beings. If you were to rise up above and look down you would see thousands of people rushing here there and everywhere in pursuit of something, yet they didn’t really know what it was that they were pursuing.

Those people had forgotten how to live. They had forgotten the important things in life. Everything was grey. Children’s laughter had been long gone as their eyes lay glued to electronic devices.

The beautiful natural world seen clearly from above was desolate as no-one ever thought to go there.

Yet in this undiscovered world held extraordinary beauty. There was so much joy and happiness to be discovered.

There were places to go where people felt connected, peaceful and relaxed.

There were fun adventures waiting for them and, if they just took the chance they would find extraordinary people on the same journey who would light each other up and together they would create communities based on love, compassion, contribution and adventure.

There was only one problem. These people didn’t know it existed and had no idea how to access it.

And so enter the heroine of the story. She was known as The Possibility Whisperer.

She was loving, compassionate, and approachable yet wildly driven to see her vision through. 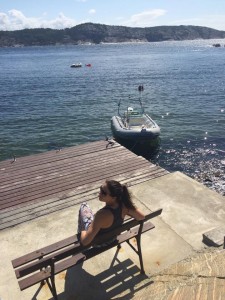 Her quest in life was to breathe possibility into these grey people. She would not have to say much, but she held the key to unlock the greatness in all the people.

One by one, as she touched them, colour would begin to stream into their souls and light them up, and they would naturally be drawn into the beautiful, colourful part of the world.

As these individuals were touched, they would start to possess similar powers and would be able to impact and influence others.

One by one, people would become connected through love and communicate from the heart everyday.

The world became a big adventure playground for everyone that existed.

The Possibility Whisperer had the ability to create spontaneous music and dance parties throughout the world and from out of space, the sound that could be heard from this planet was laughter.

No literary genius right? But you get the picture.

Now your turn. What’s your message? What you would love to see for the world? Who do you wish to be?