It’s on my mind. It’s a subject that is little talked about, that gets tiptoed around – and full disclaimer here, the following is simply my perspective given from where I am at in my journey with this.

In the last 20 months, Babs and I have lost 4 different people close to us, 3 of which were friends our age or younger. And then 2 others, who were strangers, died right in front of us on the beach, struck by lightening. So 6. That feels like a lot.

It seems to be something that is being shown to me in spades – up until this point I had no real experience. I decided to get curious about it, what I thought about it, how I’ve reacted and what I’ve learnt.

For two of our friends, it was sudden. No warning. Freak accidents, different occasions. Both were adventurers and lived life to the full. In a way it seemed fitting for who they were – no slow decline, jumping fully in. For those left behind it’s tragic, no time to get used to the idea, no time to say all that is to be said and felt – although knowing them they would have done that anyway.

The second two, one of which was my Mum, died of cancer. Slow, prolonged, agonising.

I’m going to state the obvious here – we all die, and we all know we are going to die and so in many ways I’m very grateful to have had my consciousness expanded around this.

Here’s what I’ve learnt, particularly from my Mum, given I was with her those weeks before and at the very point of passing.

It’s the ultimate test in your ability to let go. By the end, all she wanted was to go, she was done, in full acceptance but couldn’t fully let go. It drove her mad. She still had attachment to the physical world, to us, worrying how those of us left behind would be, still trying to be in control of the outcome and let her and others personal preferences rule the show.

Her freedom lay in letting go. I’ve come to realise that for all of us, that’s where our ultimate freedom lies and not just at the point of death.

If we mastered letting go of being attached to the expectations and outcomes we put on ourselves, whilst in the midst and prime of our lives, and allowed life to guide us – our levels of joy, true genius and space to contribute to the world would soar.
(This is such a note to myself!!)

2. WHEN YOU ARE CLOSE TO DEATH CLARITY REIGNS

In my Mum’s last few weeks, her clarity and wisdom was laser sharp. She KNEW what mattered. And what didn’t. She became a sage. Friends came to ask her wisdom. She was on fire.

All the unnecessary thinking that plagues us simply moved aside – I’m sure the thoughts came in as ever, but no energy was given to them. So they came and they went. As thoughts always do with no energy behind them.

Any vanity was redundant. So not important.

Presence, love, connection and actually humour, was what was left. Humour reigned until the very end. I think you must get to a point where you see the humour in the perceived struggle we make this thing called life.

4. THE POINT OF PASSING IS ACTIVE

When Mum passed away I was looking her straight in the eye, holding her hand and telling her what an amazing, beautiful, light, free, unconditionally loving place she was going to. I don’t know where those words came from but it’s what came out. She squeezed my hand, took three breaths and then she was off. She didn’t ‘die’ – her body did, but her spirit soared. I can’t explain it but I know what I experienced. I felt euphoric. You might think that is inappropriate but at the time it was one of the most beautiful things I have the gift of experiencing. 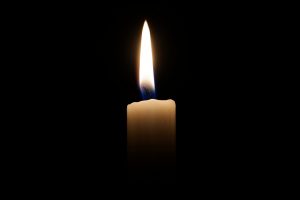 5. FOR THOSE LEFT BEHIND, LIFE CARRIES ON.

I know I was lucky – I had a graceful experience. But the fact is, I’m ok. I got up those months after, I functioned – sometimes not so well, but I’m ok. My mind told me when I knew she was probably going to die, that I wouldn’t survive it. But we are resilient – that’s our default. I still have thoughts that if something happened to my kids, I wouldn’t survive it. And yet people do. It’s a thought.

6. WHAT’S YOUR RELATIONSHIP WITH DEATH?

Mine has changed. There’s still fear but there’s more acceptance. I do my best now to truly live, not coming from a place of surviving life (or death) which is how, if most of us were honest, people live. In survival. Barely breathing to ensure we get through this thing called life – to have proved it all and achieved xyz.

I am dedicating the rest of my life to living fully with whatever life has in store for me. To go with the flow with it, even more than I do now. In some areas I’m masterful, in others I’m a compete beginner. To do whatever work I need to do to learn to let go of attachment to how I think it should look.

I have alot to learn in this space but I intend to have fun with it along the way. And I’m set on believing that nothing dies – we just return to the energy from which we are made.