One Of The Most Profound Things I Have Ever Read

I finally got around to reading Viktor Frankl’s ‘A man’s search for meaning’. I’m not sure why it has taken me so long – perhaps because I knew it would be a hard read emotionally.

There was one insight that has hit me right between the eyes that makes so much sense to me. I think I am reading it now because I’m in a place to really understand this. 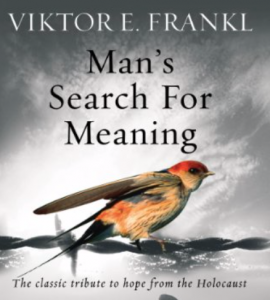 To give you context, Viktor Frankl was a psychiatrist who spent years in the concentration camps during the 2nd world war. What he, and thousands of others experienced at the hands of other human beings during this period was unfathomable.

His book, although speaks frankly of the experience, was not meant to dramatize, he was really seeing it through the lens of a psychiatrist, deepening his understanding of what it was to be human and what has us thrive.

He clearly had some extreme case studies going on. One of the questions that he was really seeking an answer to was – what was the difference in mental state between those who survived and those who perished in the camps (other than the ones that were chosen to be gassed).

His answer was concluded to be those that found meaning in life IN THE MOMENT.

Meaning for many speaks to purpose – defined as something they have to discover for themselves, something to work towards, something ‘out’ there. Hence the question – how do I ‘find’ my purpose. The amount of struggling people I have met that are tied up in knots because they are struggling to find their purpose.

In the camps – lofty dreams of ‘purpose’ were stripped away. A life of expectations was ripped from them. Those that lived through that lens were driven to deep despair.

“We had to learn ourselves and, furthermore, we had to teach the despairing men, that it did not really matter what we EXPECTED from life, but rather WHAT LIFE EXPECTED FROM US.

We had to stop asking about the meaning of life, and instead to think of ourselves as those who are being questioned by life, daily and hourly…….Life ultimately means taking the responsibility to find the right answer to it’s problems and to fulfil the tasks which it constantly sets for each individual.

These tasks, and therefore the meaning of life, differ from man to man, and from moment to moment.”

Those that could find meaning in the intense suffering, just one moment at a time, were those that survived. Humour still existed. Connection existed. Compassion existed. Anger existed. Fear existed.

Those that tried to live into a world of expectations….didn’t survive. Once their expectations or goals were not met (i.e. being home from Christmas) they were thrown into such depths of despair their will to live left them.

I realise this is an extreme example. But I see this often and is a lesson as much for me as anyone else.

There’s a culture of ‘when life delivers me this (whatever is on your vision board) I will be ok’. Or the incessant goal setting to ‘get’ somewhere or ‘be’ someone.

With this approach we miss what is right in front of us. The meaning in this very moment. The joy, the sadness, the beauty, the pain, the excitement, the fear.

All of these, if you are willing to feel them, will give you a true experience of being alive and thus life. The alternative is numbing out the negative emotions to keep up the ‘mental positive thinking’.

Life is happening now. It will alway throw you challenges, just as we are always living in the world of possibility.

The question is, what is life ASKING OF YOU now?

Answer that and you might just find a little more meaning to your life. It’s a question I will from now on pay more attention to.

You have EVERYTHING you need NOW to thrive, it’s part of our natural make up. Viktor Frankl demonstrated that in spades.

« Thoughts On Being BusyLooking In The Wrong Direction: Seeing This Can Set You Free »