This Will Lead You to Personal Fulfilment

It’s when people do things their way and actually follow what’s in their heart.

It’s when they get closer to the truth of who they really are. It’s when they give themselves permission to be unapologetically them, and do what is true for them, not what others are telling them they should do. Or what society deems to be the way to do things. Or following a formula that doesn’t fit them.

The more I commit to following my truth, and releasing the shackles of so much ‘learnt education’ from school upwards, the more I become so aware of what and how my kids are learning because this is where it all starts.

My mission is to create the space for them to be who they are everyday. It has us really ques 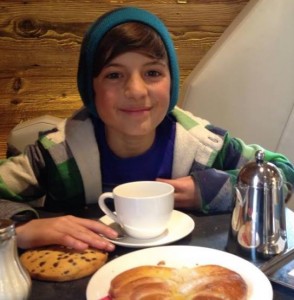 tion the education choices we make. The world no longer requires us to ‘memorise things’ – as Zak said last year when in the French system, ‘Mummy why do I have to memorise this stuff, I can just google it’.

The world needs innovators and people who are prepared to think out out of the box to solve problems with different levels of thinking that already exist. The problems wouldn’t exist if we already knew the solution.

I was an academic kid, who was trained to do what she was told, rote learn and regurgitate. I was good at it. But one of my biggest challenges is releasing my own creativity now because I was never ‘taught’ creativity (because in my model of the world you learn stuff through being taught).

It hasn’t served me in the slightest. I struggle to try new things in case I fail. Perfectionism is a trait in me and it’s held me back.

I’m not saying there isn’t a place for traditional learning, we all need the fundamentals and the discipline of learning, plus we need those people that do get on and do what we know works in the job market.

BUT – there is also a growing need for thinkers, innovators, communicators, creators to move this planet forward.

It’s not too late for us as adults, there is just a bit of crap to clear around what we believe is possible for us. It takes working on ourselves. It takes a willingness to see new perspectives and recognise your own worth for your own ideas. And that it’s ok to fail. You just try again a different way.

We are no longer in the industrial age. We are in the age of innovation.

Give yourself a chance to step beyond your own box of conditioning.

Try what you don’t know to do.

Life expands. Since I have been following this path of simply being willing life has opened up beyond expectations.

It’s a ride. It’s not always easy. But I get to make a bigger impact and contribution than I ever thought possible.

Say yes to yourself and do whatever it takes – whether that is coaching to help remove the shackles, whether it’s a decision you could make today….just take the first step.

If nothing else it will make you feel fully alive.

« What Makes A Great Coaching ClientThe Human Race Is Remarkable »